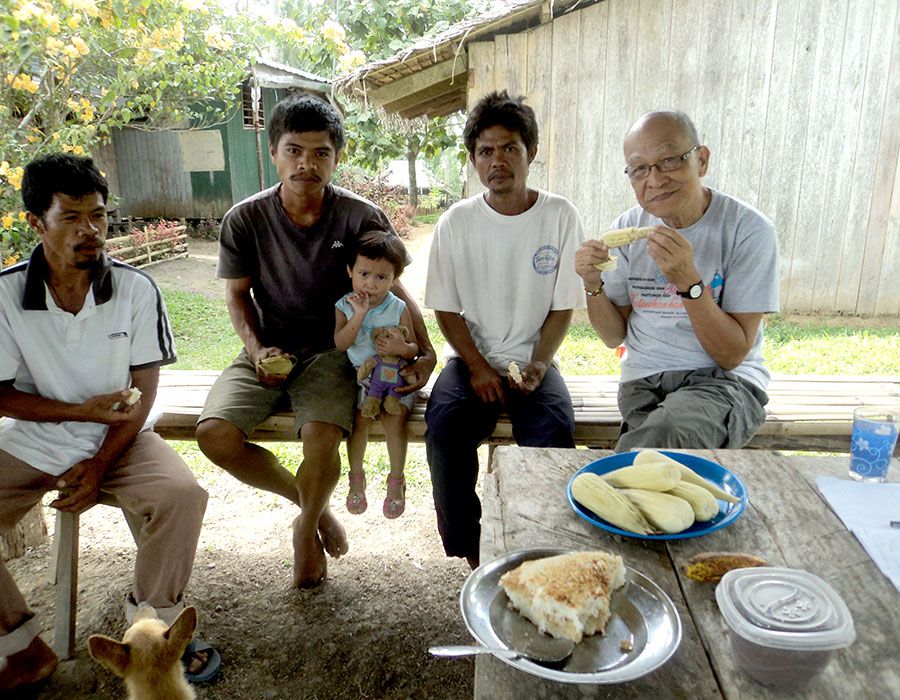 In the Year of the Clergy and Consecrated Persons, World Mission features Bro. Karl Gaspar, an award-winning writer, respected socio-anthropologist, theologian, interfaith scholar, and missionary from Davao City. He shares the reasons for his passion for Indigenous Peoples (IPs) and his vocational option.

Advocating for the IPs as well as voicing out the concerns of the Church may be deemed as difficult, even dangerous for anyone. However, this is what Redemptorist Brother Karl Gaspar has been doing for most of his life.

He has been inspired by the simplicity, humility, and generosity of the IPs. “They are so welcoming to strangers and visitors to their villages, and so trusting. Their childlike characters can be disarming. Apart from this, I am also inspired by how they live as communities, with their kinship system still very much intact, which makes them quite concerned for one another,” he said.

“As somebody born in Davao and growing up in parts of Mindanao, I was early on exposed to indigenous peoples who came down to town especially on market days. And I have always been fascinated by the richness of their cultures. Later on, as a development and church worker going around Mindanao, I had more contacts with them, and the more I really got drawn to their cultures,” explained Gaspar.

He revealed that his family’s predecessors were also part of this group. On his mother’s side was the Pangasinense, while on his father’s side was the Capizeno. “I have always believed that I am able to honor my ancestors and be able to link myself to them if I make an effort to have ties with the IPs of today in our country and know more about them, and celebrate the richness of their lives and culture.”

Martial Law Now And Then
Martial Law has been extended for a year more in the southern part of the country, Mindanao. With this, Gaspar stood firm as he believes that “it will make life more miserable for the Filipino people as there will be more restrictions to their human rights and civil liberties. Media will become even more constricted and it will become more and more difficult to express resistance to the abuses of the State.”

Brother Gaspar was also a victim of the Marcos dictatorship. He was arrested on September 23, 1972, just two days after the then President Ferdinand Marcos placed the country under Martial Law. He was detained in his house for three months. In 1974, he was taken to Lake Sebu in South Cotabato and imprisoned for almost two years at the Davao Metrodiscom. He was later acquitted by the Regional Trial Court.

“Life as a political prisoner is not a picnic,” Gaspar recalled. “Spending 22 months in cramped prison cells with substandard food and no privacy made life very difficult.”

“The dictatorial regime of Marcos was a time of extreme hardships for indigenous peoples,” he said. “There were a lot of military operations in the uplands resulting in massive evacuations of the Lumads.”

“Things improved a little bit in the administration of Cory Aquino with the recognition of the rights of the Lumads to their ancestral domain, and especially during the time of (Aquino’s successor as President) Fidel Ramos when the Indigenous Peoples Rights Act or IPRA was passed by Congress.”

After the terms of these two leaders, however, the Lumads have again been sidelined. This was what dissatisfied Gaspar during the four succeeding presidencies.

He expressed his frustration with the current administration. “Right now, I am very much disappointed with the Duterte administration. When he run and won, I was optimistic at first given the promises he made. But it is more than two years and most of his promises have not been fulfilled.”

He said that “with the passage of the Mining Act, many of the Lumad ancestral domains have become problem areas with mining explorations and operations. Military operations have also been taking place in the uplands causing problems to the Lumads’ security.”

His Family Life
Giving much importance to life and family, Bro. Karl explained that it was his familial relationship which helped him decide on his vocation. His parents encouraged him to follow the path that now he has taken, so too did his brothers and sisters. “My mother was a very religious and kind person who was always at the service of others. She inculcated in me the desire to be also at the service of others.”

His father, on the other hand was a genuine person, whom he described as “a staunch supporter of truth and justice in our community. Through him, I imbibed the desire to work for justice and peace.”

His parents had him attend high school at a Catholic school for boys. He went to the Holy Cross Academy Boys Department in Digos City (now known as Cor Jesu College).

“The example of the Brothers of the Sacred Heart was very impressive for a young man such as me,” he recalled. “And I was greatly influenced by the manner of their witness to the Gospel as teachers and mentors. It was in that school, with the encouragement of the Brothers that I began to think of becoming a religious Brother.”

What finally made him decide later on to join the Redemptorist Missionaries was the mission work that they were doing among the poor communities and witnessing to the Gospel in these localities.

With the different missions that he was witnessing, Gaspar was attracted to join them “especially as this was during the time of the dictatorship of Marcos. They were very much involved in the advocacy for peace and justice and doing community organizing and evangelization working among impoverished communities across Mindanao.”

“I was also impressed with their simple lifestyle and the manner that they lived their community life. So far, my journey as a Redemptorist has been very inspiring. I get a lot of affirmation and support from my confreres and since I joined the congregation, I have been allowed to pursue the kind of ministry work I am passionate about.”

Fighting For The Oppressed
Bro. Karl Gaspar, even in his declining years, persistently fights for the oppressed. He has even received accolades for his advocacies. In 2017, The Asian Catholic Communicators, Inc. gave him an award as he “popularize the concerns of the Church in the world today as a way of communicating the Gospel to the public, but also for his commitment in terms of ministry and praxis manifesting his witness.”

The Ateneo de Manila University recently released a statement describing the missionary Brother as “a champion of the indigenous peoples’ cultural and resource rights, who promotes a deeper understanding of their culture among the non-lumad population through teaching, and his academic and popular writing. Also a staunch advocate of peace, Bro. Karl has engaged in extensive peace-building efforts through interfaith dialogues and ecumenical involvements in Mindanao.”

When reflecting on his religious vocation, Gaspar had always wanted to become a Brother. He told World Mission, “I opted to become a religious Brother rather than a priest because I believe there is far more that I can contribute to the evangelization work of the church by remaining a Brother. I was afraid that priestly demands as well as people’s expectations in a society such as ours which is highly clerical-oriented would be an obstacle in my desire to be fully immersed among the poor to be at their service. Besides, Brothers have much more choices in terms of the range of ministry work,” he concluded.

It was clear that from the moment Gaspar decided on his vocation, he knew what he would become – a church worker, an anthropologist, a theologian, and a peace advocate. Everything remains within his action point. He would not let anyone, not even those who are in power, stop that.