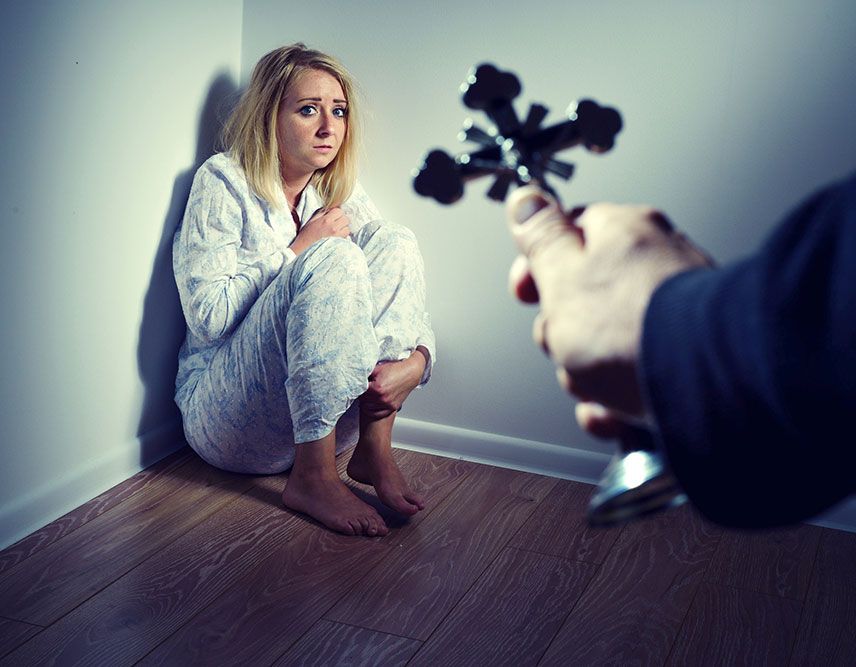 Possession is the most severe form of extraordinary demonic attack in which demons take control of the body (not the soul) of a person. According to the Catholic Handbook of Deliverance Prayers, manifestations of demonic possession can range from an immobile catatonic trance state to a full-fledged, physically violent display of hatred and pride

Fr. Aga is the parish priest of the San Antonio de Padua Parish in Parañaque City, and the chief exorcist of the Diocese of Parañaque Office of Exorcism. He reveals that in most of the cases that he has handled, the afflicted persons offered some degree of cooperation with the demons that were trying to possess them. “Mortal sin is the primary entry point for demonic possession. Other risk factors include involvement in occult practices, weakening or loss of faith, and psychological trauma such as sexual abuse.”

Demonic Activities
Since its establishment in 2010, the Diocese of Parañaque Office of Exorcism, which serves the cities of Parañaque, Muntinlupa and Las Piñas, has received more than 500 reports of alleged demonic possessions, according to Fr. Aga. To date, only 11 cases have been confirmed as authentic demonic possessions. The vast majority of cases involve infestation and oppression, which are less severe forms of extraordinary demonic activity.

Infestation afflicts animals, things or places that are usually associated with occult practices or heinous crimes. Oppression includes burdens or afflictions that torment from the outside which can affect the afflicted person’s health, emotional wellbeing, spiritual life, relationships and work. If not addressed, the Catholic Handbook of Deliverance Prayers warns, oppression can progress to full-blown possession.

Fr. Aga recounts a case of oppression that he handled several years ago. A man had applied for a job, passed the screening tests and interviews, and was told by the company’s human resource staff to report for work. Arriving at the office on the day that he was instructed to report for work, he was asked by the HR staff, “Didn’t you receive our notification that another applicant had already been hired for the position?” Baffled but determined, the man applied to seven other job openings. The outcome was the same every time.

Investigative Process
Exorcism, which is also called the ministry of liberation and deliverance, is not only about the rite itself and the prayers that the exorcist recites. It is also a long investigative process involving numerous interviews, meetings and evaluations, lots of paperwork, and long-term counseling. First, the afflicted person (or family member/caregiver) writes a detailed narration of the alleged demonic possession that must include when the manifestations started, preceding events or circumstances that could have triggered the manifestations, the afflicted person’s family background, and a description of his or her spiritual life.

The written case story is submitted to the exorcism team which then discusses and evaluates it. If there are any vague details in the case that need clarification, the team sets an interview with the afflicted person that is conducted by a case officer who is a lay person. The exorcist does not communicate directly with the afflicted person or their family during the evaluation process.

“There is probable cause to proceed further with the investigation if the exorcism team confirms that the afflicted person has one or more of the classic signs of true demonic possession,” says Fr. Aga.

Exorcist Must Be A Skeptic
At this point, the case officer refers the afflicted person to the psychiatrist of the exorcism team who conducts a comprehensive clinical evaluation to rule out any clinical psychiatric condition. “An exorcist must be, first and foremost, a skeptic. Demonic possession may mimic symptoms of psychiatric disorders, so these have to be ruled out,” explains Fr. Aga.

If psychiatric disorder is ruled out and there is a “confluence” of manifestations of true demonic possession, the team proceeds with the formal exorcism.

Exorcism comes from the Greek word exorkismós, which means “binding by oath.” It is performed by an exorcist, an ordained priest who has received special training and authority to perform the exorcism rite. In an exorcism, the exorcist invokes the name of Jesus Christ as well as members of the Church Triumphant (people in heaven) and Archangel Michael to bind the demons spiritually and cast them out from the afflicted person. In most cases multiple exorcisms are necessary, and may take weeks to years.

Spiritual Warfare
“Demons always attack in droves, with an alpha demon leading a legion of minions,” says Fr. Aga. “The demons speak and act without the consent of the afflicted person who will have no recollection of what happened while he or she was under demonic control.”

Fr. Aga’s first exorcism case involved a 10-year-old boy whose parents were his parishioners. He had taken over the case from another exorcist. Fr. Aga recalls making an unannounced visit to the hospital where the boy was confined because of fever—this would be their first meeting. Neither the boy nor his parents knew Fr. Aga was coming, and he intentionally wore civilian clothes instead of his cassock. As he entered the hospital room, the boy immediately became very angry and shouted at his parents, “Why did you let that priest in? Ask him to leave now!”

The worst case of demonic possession that Fr. Aga handled was that of a 12-year-old boy who was the product of an unintended pregnancy. The mother left him with his grandmother who has been taking care of him since he was a baby. The boy hated his mother.

“He was possessed by the demon of wrath. Whenever our team prayed over the boy, the bed, cabinets, and appliances inside the grandmother’s house would spontaneously erupt in flames. I remember a fire truck and a team of firefighters often parked in front of the house,” says Fr. Aga, adding that the case had been well documented, with many pictures of the spontaneous combustion incidents stored in the secret archives of the diocese. After several exorcism sessions and extensive counseling, the boy was eventually liberated and is now living a normal life.

Relationship With God
Fr. Aga makes an important point on why possession is considered an extraordinary form of demonic attack and why cases of authentic demonic possession are very few. “Possession is not the demon’s primary weapon. Ordinary demonic activity involves temptation. If demons can lure us to sin through temptation, then there’s no need for them to possess us.”

Beyond casting out demons, the ultimate and central goal of exorcism is to guide the afflicted person to grow in holiness by bringing him or her closer to God, according to the Catholic Handbook of Deliverance Prayers. Fr. Aga offers this advice, “Focus on strengthening your relationship with God. A strong faith and close relationship with our Lord, Jesus Christ, will protect us from evil.”

The Fascination of the “Little Boy”

On March 16, 1521, Magellan and his Spanish fleet arrived in the Philippines. The first Mass was celebrated at Limasawa. The newly baptized Queen Juana received the statue of the Santo Niño, like the…