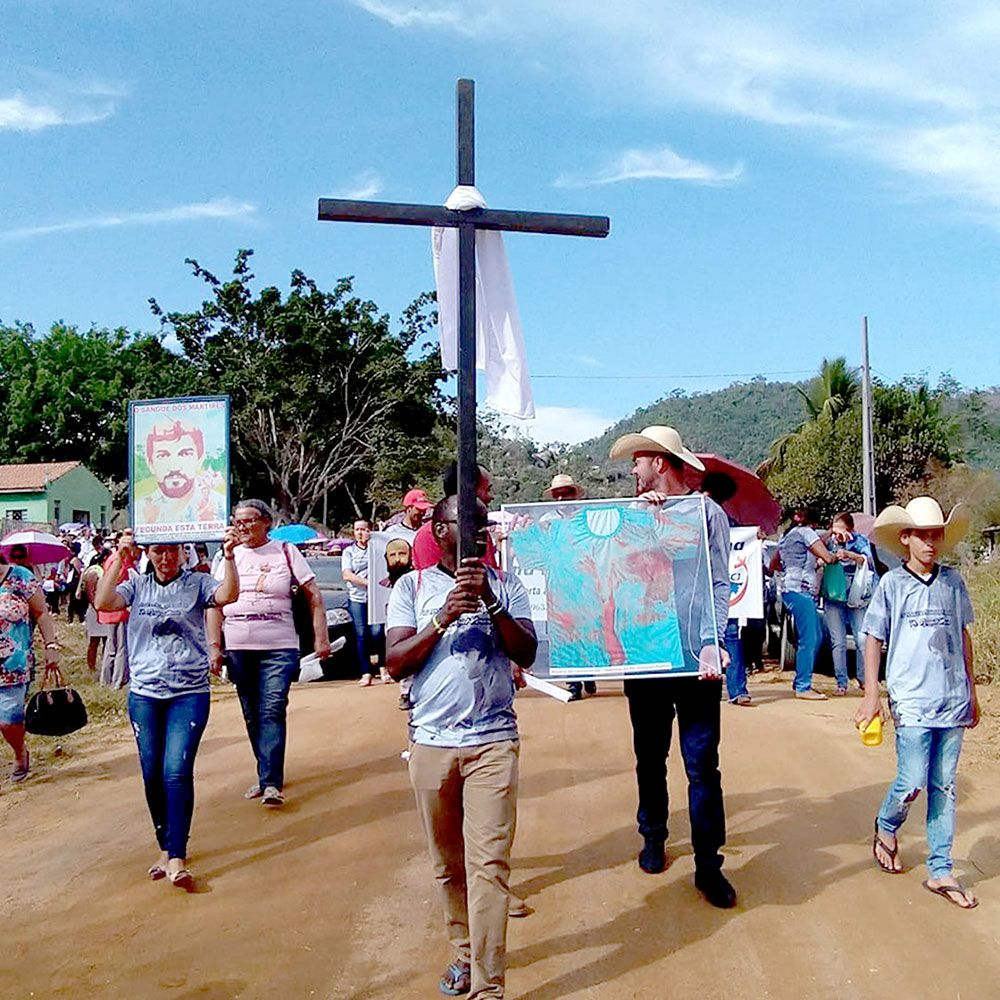 Martyr of the Amazon

Arnaldo Baritussio | Postulator for the Cause of Fr. Ezequiel Ramin

Returning from a mission of peace, Father Ezequiel Ramin, a 32-year-old Comboni missionary was gunned down in Rondonia, Brazil, in 1985, by armed guards hired by a landowner. The evidences of his martyrdom are being examined at the Vatican so that Pope Francis may declare him a martyr.

Born in Padua, Northern Italy, in 1953 in a modest and religious family, Ezequiel Ramin was an extrovert and open-minded character. Even at a young age he already felt that as a Christian he could not be indifferent to the most distressing problems of the world, including hunger and injustice.

A former teacher described Ezequiel as someone who first cared for others, before himself. He was an incorrigible dreamer and a person in solidarity with all victims of suffering. It came as no surprise when he manifested to his family the desire to join in the Institute of the Comboni Missionaries and be a missionary in Africa.

Brazil As His Destiny
Ezequiel dreamed of being a missionary in Africa, but God was waiting for him in the northern region of Brazil, in the state of Rondônia, Diocese of Ji-Paraná. It was in this area that social tensions arose due to disputes over land possessions. In June 1984, he was appointed parish priest of Sagrada Família de Cacoal parish.

The state of Rondônia is part of the Amazon region where much of the land was obtained through fraudulent documents. The rich diamond and minerals region became a place of corruption, violence, slave labour and servile exploitation, a breeding ground for conflicts amongst indigenous people and attacks on the environment.

In Rondônia, political and economic power relied not only on the possession of land but also arms and alliances with the police and the judiciary. The authorities used to openly say that they were in the midst of a war, deceiving people and slandering community leaders.

The state governor, Jorge Teixeira, used to say that there was too much land for a few indigenous inhabitants. He denounced to the national intelligence service the ‘subversive’ preaching of the Comboni missionaries in his state. The police were usually siding with the powerful political and economic personalities.

In Rondônia, there was a plan to carry out a “clean massacre” of the indigenous people. This diabolic plot used the most violent and unusual means to annihilate the natives who should surrender their lands for ‘development’. Rondônia became a land of greed where the law was the shotgun.

Friend And Companion
In Cacoal, the pastoral work was articulated around the Basic Ecclesial Communities which became an eye-opener into the local reality and through which Fr. Ramin came into contact with many families. Networking with communities, trade unions, and institutions working for justice, the missionary began to deal with expressions such as awareness, liberation, community, solidarity, social justice, which was upsetting the political-economic system.

His spirituality also matured. He became aware and even scandalized with the violent reality of the latifundio - an extensive parcel of privately owned land –with its wire fences and bread crumbs left over for the little ones. As he walked with the people and worked with communities he realized that his job consisted in “announcing and denouncing.” He would say, “I am proud to use my word today to denounce the abuses and to be able to work supporting popular movements.”

He integrated himself prudently in the indigenous community of Suruí which was fighting for the demarcation and preservation of its territory. To the Indian chief Itabira Surui who had warned Ezequiel of impending persecution should he try to help the Indians, the missionary answered immediately: “We’re going to die together! I came from my country to defend the indigenous people and I will defend their land.”

Itabira is moved while recalling these words and adds: “The only man who spoke the truth to me was him. None of the priests equalled the heart of Ezequiel.”

Fr. Ezequiel also joined the small farmers’ struggle for a piece of land. “These people are like little dogs,” he used to say. “They receive only bones, and I often feel a lump in my throat thinking about the miles of wire fences. Today we have a great deal of excluded people: forgotten migrants in hospitals, in prisons, in hospices, in barracks, excluded from human life.

How can we remain indifferent to all this? Around me people die, the latifundio increases, the poor are humiliated, the police kill, and the indigenous reserves are invaded.” This was enough to draw the ire of government institutions like FUNAI and the landowners.

Yet, Ezequiel did not cross his arms and sought refuge in the ‘sacristy.’ He had learned that the see-judge-act method had to be conjugated until it touched upon the reality. Thus, the Comboni missionary also supported the local trade union of farmers who had Mr. Adilio de Souza as its president.

A Shepherd
In his visit to the communities, Ezequiel spared some time for social formation and information on labour issues in such a way that there was a complete growth and articulation between religious knowledge, exercise of the various ministries and sense of citizenship.

The pastoral of the sacraments, biblical formation, leadership, fundraising, catechesis at all levels, self-reliance, health and social awareness were an integral part of being Church that met every week through the Basic Ecclesial Communities. In Father Ezequiel the simple, suffering but determined people had found a shepherd.

Meanwhile, at the beginning of January 1985, an issue was becoming increasingly serious in the border region between Rondônia and Mato Grosso. Here lived small farmers threatened by the landowners of Fazenda Catuva, a huge farmland on the border with the state of Mato Grosso, the third largest state located in the western part of the country.

On the verge of a violent clash between the jagunços (armed guards) of the farm and the squatters (farmers looking for land to cultivate), he saw the urgent need to be a mediator of peace in that moment of great tension.

Let Us Talk!
The situation was grave but the presence and word of the priest reassured the group of farmers. He managed to persuade the squatters to leave the place. Satisfied with the peaceful outcome of the negotiations, he made his way back home. On a road bend, seven jagunços suddenly appeared in front of his car and began to shoot. He got out and shouted, “I am a priest! Let’s talk!” It was to no avail because the bullets hit him killing him instantly while Adílio, his companion, managed to escape.

Father Ezequiel did not choose violence or death, but peace and life. He had a radical stance in the face of a radical conflict. He gave an answer to the terrible historical moment in which the poor, the communities, the migrants, and finally the marginalized lived. He was compassionate in a universe of pain, uncertainty, abandonment. He tried to transmit hope, joy, fraternity and, at the same time, perseverance in the struggle.

He knew that the system wanted to eliminate the prophets because they were troublesome. The prophet can fall, be physically eliminated, but his voice is that of a sentinel who continues to announce better days.

That is why the next Synod on the Amazon chose, among others, Father Ezequiel as one of its saints and martyrs. Yet there is a peculiar aspect of Father Ezequiel. He not only believed in the necessary adaptation of Christianity in the Amazon, and therefore in the indispensable value of the cultural heritage of the indigenous peoples, but even more so in the urgency of dialogue between all the realities present in the Amazonian territory for a just and dignified solution for its future.

Here is what one of the Suruí caciques said about Ezequiel: “I noticed that Father Ezequiel loved all - settlers and natives. He did not want friction between natives and settlers. He wanted peace and unity among all. He wanted each person to have a dignified place to live in. He wanted to save the lives of all: farmers, Indians and settlers.”

We are now waiting for the historians, theologians, bishops and cardinals of the Vatican Congregation for the Causes of Saints to evaluate the evidence of his martyrdom and to provide the Holy Father the elements to declare him a martyr and to rescue the memory of all those who fell while working for peace and justice.

The Special Synod for the Amazon wishes to contribute to the new ways of building up the Church and an integral ecology. The objective is to create conditions that allow the populations that inhabit…