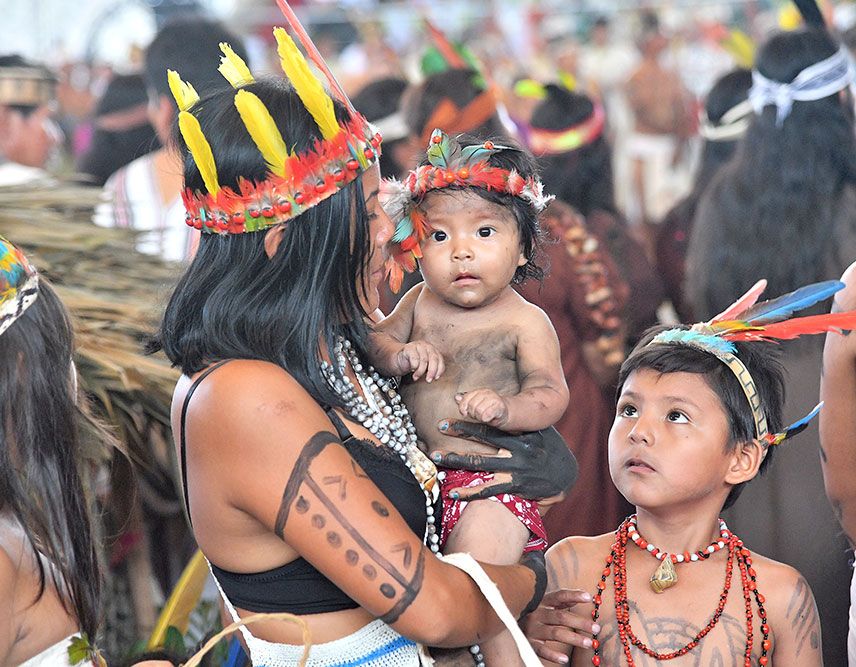 The Special Synod for the Amazon wishes to contribute to the new ways of building up the Church and an integral ecology. The objective is to create conditions that allow the populations that inhabit the vast Amazonian territory to live with dignity and to look with hope to the future.

The Amazonian territory covers an area of ​​approximately 7.5 million km2 strewn through eight countries of South America (Bolivia, Brazil, Colombia, Ecuador, Guyana, Peru, Suriname and Venezuela) plus the French Guiana as an overseas territory. It represents 43% of the surface of South America. 20% of the fresh water on the planet is in the Amazon and it also contains 34% of the world’s primary forests, which contain between 30% and 40% of the world’s fauna and flora.

It is a biome, that is, a living system, which functions as a regional and global climatic stasbilizer, keeping the air moist and producing one third of the rains that water the earth. It has a great sociocultural diversity, since it is the home of about 2.8 million indigenous people who belong to 390 villages, 137 of which are isolated villages. Its 33 million inhabitants are divided into 49 different linguistic groups that speak 240 languages.

In the context of the Amazon, the Church has followed the mandate of the Gospel and accompanied the rhythm of the poorest people since the beginning. In these realities, the missionary vitality of the Church in the Amazon stands out. In this portion of the Earth, life is expressed in its extraordinary diversity as a gift from God for all who inhabit it. However, it is an increasingly devastated and threatened territory.

According to the Social Doctrine of the Church, the mission of every Christian comprises a prophetic commitment to justice, peace, the dignity of every human being without distinction, and to the integrity of creation in response to a dominant society model that produces exclusion, inequality, and provokes what Pope Francis has called a true “culture of waste” and a “globalization of indifference.”

This biome, besides being “a source of life in the heart of the Church” and one of the most biodiverse sites in the world, is also the home of many cultures that have lived there for centuries and whose existence and identity are currently at risk because of the eminently extractive model that is now imposed.

The Church wishes to collaborate with all government agencies, civic organizations, and with the people themselves, having genuine interest in the promotion and defence of human rights.

For this purpose, the Pan-Amazonian Ecclesial Network (REPAM, in Portuguese) was created in September 2014, with the approval of the Holy See through a letter from Pope Francis in which he states: “We cannot live alone, locked in ourselves [...]. Only in this way can the Christian witness, thanks to the Network, reach the human existential peripheries, allowing the Christian ferment to fecundate and advance the living cultures of the Amazon and its values.”

The Rights Of Peoples
Most of the states in the Amazonian territory are signatories to the international conventions on human rights and the respective instruments associated with the rights of indigenous peoples and care of the environment.

Therefore, we are sure of their commitment to comply with them. The Church wishes to be a bridge and collaborate with everyone in order to achieve this goal for the good of each of the countries represented in this territory, for the dignified and full life of the peoples who live there, and for the care of this ecosystem essential to the present and future of the planet.

The United Nations Declaration on the Rights of Indigenous Peoples (adopted on December 13, 2007) to which the Pope has referred on several occasions, contains rights as important as the right to self-determination, under which indigenous peoples determine their political status and freely pursue their economic, social and cultural development (Article 3).

In the exercise of their self-determination, indigenous peoples have the right to autonomy in matters related to their internal and local affairs (Article 4).

Article 6 of Convention 169 of the International Labour Organization (ILO) on Indigenous and Tribal Peoples in Independent Countries asserts the right of the indigenous peoples to be consulted “in good faith and in a manner appropriate to the circumstances” so as to obtain their prior, free and informed consent before enacting any legislative or administrative measure that might affect them directly.

We especially appreciate the ratification of ILO Convention 169 by the nations of Bolivia, Brazil, Colombia, Ecuador, Guyana, Peru and Venezuela. Likewise, Bolivia, Brazil, Ecuador, France (French Guiana), Peru, Suriname and Venezuela voted in favour of the adoption of the United Nations Declaration on the Rights of Indigenous Peoples in 2007.

Response To Climate Change
With regard to the firm response to climate change, which represents an unavoidable global ecological crisis, all the countries that are part of the Amazon basin are signatories to the Paris Agreement, and we are convinced of their commitment. However, given the “climate emergency” we are facing today, we must demand that they do much more, just as the entire global society must work much more effectively in this same objective.

Caring for this ecosystem is fundamental to achieving the objectives of the Paris Agreement. Pope Francis himself, when talking about the native peoples, says that: “When they remain in their territories, they are the ones who best care for them.” (Laudato Si, 146).

At the national level, some constitutions of the Amazonian countries that have progressively incorporated these same rights on free, prior and informed consultation, have developed environmental standards to reduce deforestation and created mechanisms to ensure respect for natural reserves and recognition of indigenous lands. Although, it must be said clearly, there is a serious limitation or, in some cases, lack of effective commitment or willingness to comply.

Vulnerable Indigenous
Indigenous peoples in voluntary isolation (IPVI) should be considered with the highest priority due to their high degree of vulnerability, their specific anthropological condition and the need to protect them from any violation of their human rights. Pope Francis said about them: “The backwardness of past ages forced them to isolate themselves even from their own ethnic groups; they went into captivity in the most inaccessible places of the forest to be able to live in freedom. There is need to keep defending these most vulnerable brothers.”

Protecting them is a fundamental ethical requirement, and for the Church it becomes a moral imperative consistent with the integral ecology approach that Pope Francis presents as a central proposal in Laudato Si.

Let’s Take Up The Challenge
As a Church we want to live a “culture of encounter” in the Amazon with the indigenous peoples, the communities that inhabit the shores of the rivers, people of African descent, small peasants, those who inhabit the cities, and with communities of faith in a respectful and constructive dialogue with other religions and political and social groups.

In this spirit, the official representatives of the Holy See and of REPAM have accompanied the members of the Amazonian peoples to different international and regional stages of the United Nations organization so that they can present their particular grievances.

The members of the Catholic Church in the Amazon want to be living testimonies of hope and cooperation and continue to provide an evangelizing service that sows its seeds in the fertile soil of the Amazonian peoples and in their cultures.

In this sense, the Synod, being an ecclesial event, can be a valuable sign of the effective response for the promotion of justice and the defence of the dignity of the most vulnerable people. We believe that societies, governments, and the Church in general can pay attention to these voices to assume our respective responsibilities more consistently.

We want to take up the enormous challenge posed by Pope Francis when he states: “I think the main problem is how to reconcile the right to development, including also the social and cultural rights, with the protection of indigenous characteristics and of their territories. [...] In this sense, the right to prior and informed consent must always prevail.”(III World Forum of Indigenous Peoples, Rome, February 15, 2017).  Published in La Civilta Cattolica

The shape of a mission-driven liturgy

God’s mission runs through the Church’s liturgy and defines it outwardly by breaking open the ritual onto life.