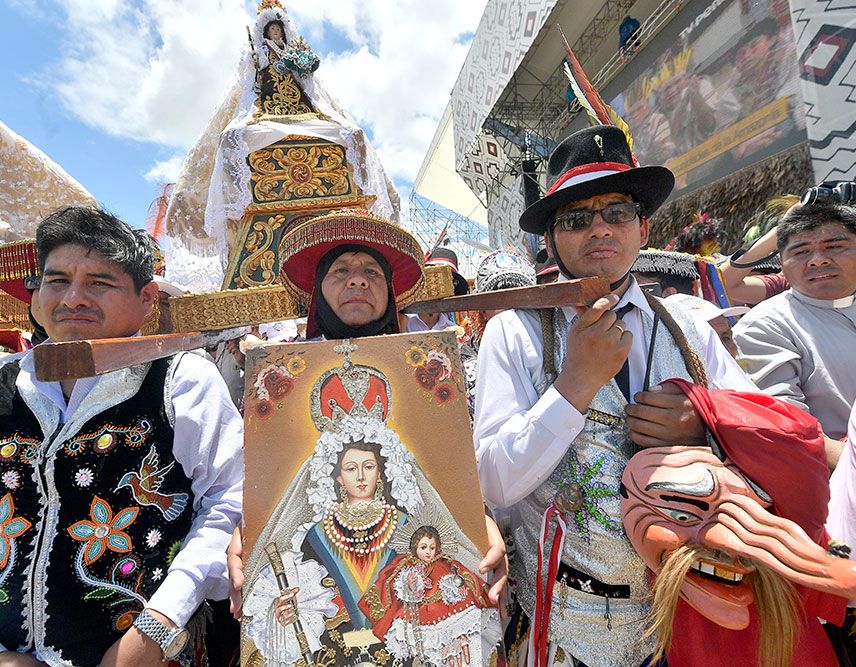 The Special Assembly of the Synod of Bishops for the Pan-Amazonian Region will take place in Rome from October 6-27 on the theme, “Amazonia: new paths for the Church and for an integral ecology.” Here are the main issues in the agenda.

According to the working document of the Synod for the Amazon, available on the Synod’s website at http://www.sinodoamazonico.va, the Amazon rainforest, covering much of northwestern Brazil and extending into Colombia, Peru and six other South American countries, provides 15% of freshwater globally and contributes to global wind currents.

Concerns for the environment in the world’s largest tropical rainforest, unmatched in its biodiversity and influence on the health of the entire planet, and concerns for the human dignity of vulnerable indigenous communities there – communities with deep cultural traditions and spiritual wisdom on living in peace and balance with all of creation – led Pope Francis to announce in 2017 that a Synod of Bishops for the Pan-Amazon region would work “to identify new paths for the evangelization of God’s people in that region.”

The working document indicates that the key discussion points for the three-week meeting in Rome in October will be the threats to life in the Amazon region by environmental destruction and exploitation, the systematic violation of the fundamental human rights of the Amazon population, in particular, the violation of the rights and traditions of indigenous peoples, such as the right to land, to self-determination, to consultation and prior consent, and possible suggestions for greater access to the Eucharist in a region with few priests.

Listening And Learning
This is the first time a Synod of Bishops will focus on topics brought to prominence in Laudato Si. It will focus on a vast territory of land with special characteristics and will address indigenous and environmental matters. For three weeks, the Church will place its spotlight on the periphery and on integral ecology, and conduct a theological discussion on lessons to be learned from Amazonia on ways to balance technology, consumption, and ecology.

Also, the process for this Synod is quite different from others in that it promotes the concept of “synodality,” a way of being that values inclusion and emphasizes listening and learning from the grassroots. Pope Francis described the process in depth at a ceremony to mark the 50th anniversary of the Synod of Bishops in 2015.

“A synodal church is a listening church, aware that listening is more than hearing. It is a reciprocal listening in which each one has something to learn.”

For this Synod, Pope Francis utilized the Pan-Amazonian Ecclesial Network (REPAM, in Portuguese) to carry out the listening process in the Amazon region that he began with his visit to Puerto Maldonado in Peru in 2018. REPAM offered material gathered from hundreds of consultations with indigenous leaders, laity, secular groups, and church leaders to the Synod to enhance the working document, “Amazon: new paths for the Church and for an integral ecology” released June 17.

While the Synod’s participants are mostly bishops, there will also be a delegation of indigenous leaders and a few lay people to provide insights on the Amazon.

In the introduction, the working document describes its structure as built on three conversions Pope Francis invites us to undergo: a pastoral conversion, an ecological conversion and synodality.

In addition to papal documents and Gospel teachings, the working document introduces the indigenous concept of buen vivir (“good living”) as an expression of integral ecology. The document says, “The integration of creation, of life considered as a totality, is the basis of traditional culture that is transmitted from generation to generation through listening to ancestral wisdom – a living reserve of indigenous spirituality and culture.”

Challenges In The Amazon
The working document names challenges to be examined by the Synod. The concept of “development” projects is questioned, especially concerning who benefits and who suffers from violence. Certain industries are called out: mining and logging, hydroelectric dams, and large-scale agriculture. It even mentions conservation projects that are more concerned with protecting ecosystems than human and territorial rights. The document decries the criminalization of people who protest these projects and violence against people who speak out.

The document highlights the special vulnerability of people who have left the Amazon to live in urban areas as well as the vulnerability of communities living in voluntary isolation, especially women in these communities, who are often preyed upon by narco-traffickers and workers associated with extractives industries.

The Synod introduces new terms in the document to reflect systemic challenges that require holistic solutions. One chapter deals with “integral health”, recognizing that human health and the health of other species are deteriorating due to the extractive industries that introduce new diseases, toxic exposures, and deforestation. Clean water, air, food, and access to gathering, hunting and fishing are named as essential to integral health. Access to indigenous and traditional medicines is also named.

Another chapter deals with “integral education” as a means of learning from and teaching each other. The document shares that “indigenous communities have a teaching-learning method grounded in oral tradition and experiential practice.” This is an education based on encounter that unites care for the earth with a commitment to those who are poor and vulnerable.

Yet another chapter names “integral personal conversion” that “recognizes personal and social complicity in the structures of sin, unmasking the ideologies that justify a lifestyle that assaults creation.”

New Ways Of Mission
The Synod recognizes past actions by the Church that caused deep wounds in indigenous communities that should not be repeated, and calls for a missionary Church that values intercultural dialogue and listening to both peoples and nature. It calls for an evangelization grounded in respect for local cultures and openness to incorporating local culture to enrich the Christian experience. This is a Church that goes out in both geographical and cultural ways, is prophetic and is in solidarity with communities and their territories under threat.

New ways of mission are proposed to expand access to the Eucharist in a region with few priests. In situations of faraway communities, the Synod will consider the ordination of elders, preferably indigenous men, even if married, to respond to the need for pastoral and sacramental care. The document names the need to identify types of official ministry that can be conferred on women, but goes no further.

What Not To Expect
Surprisingly, climate change is not prominently featured in the document, even though the protection of the Amazon and the destruction of it are consequential to the impacts of climate change. While the Synod was previously billed as not just about the Amazon but also other vulnerable biomes, Pope Francis has affirmed that this Synod must stay focused on the Amazon given its global influence. Hopefully the Church in other regions can build up on the outcomes of the Synod to protect the people and ecosystems in their biomes. This is something that REPAM encouraged at their Integral Ecology summit at Georgetown University in March 2019.

Reactions To The Synod
Faith-based and secular allies already committed to protection of rights, territories, and ecosystems have expressed appreciation for the Synod but there are others who see it as a threat.

Conservatives within the Church, such as German Cardinal Walter Brandmüller, have criticized the Synod’s approach. Brandmüller recently wrote a letter in which he called the Synod paganistic and an attempt to turn the Church into a secular NGO. Some political leaders in the Amazon region view the Synod as an attack on their sovereignty.

As stated in the working document, many people who defend the Amazon face serious threats. Brazil has been named as the country with the most murders of land and environmental defenders in multiple consecutive years, according to Global Witness. Currently, some members of the CIMI (Catholic Church’s Indigenous Missionary Council) are in hiding for fear of their lives.

Despite this opposition, there is still much support for the Synod from inside and outside of the Church. The Brazilian Bishops have expressed significant support, especially Cardinal Pedro Hummes, president of REPAM, who Pope Francis appointed as General Rapporteur for the Synod. The Peruvian Bishops also have expressed support and Cardinal Pedro Barreto serves as vice president of REPAM. Grassroots activists, indigenous leaders, and others plan to convene in Rome during the Synod to express their support for the meetings.

Modern-Day Missionaries to the World

Overseas Filipino Workers (OFWs) take and practice their faith fervently wherever they go or are. That is why the Catholic Bishops Conference of the Philippines appreciates the role of OFWs as…