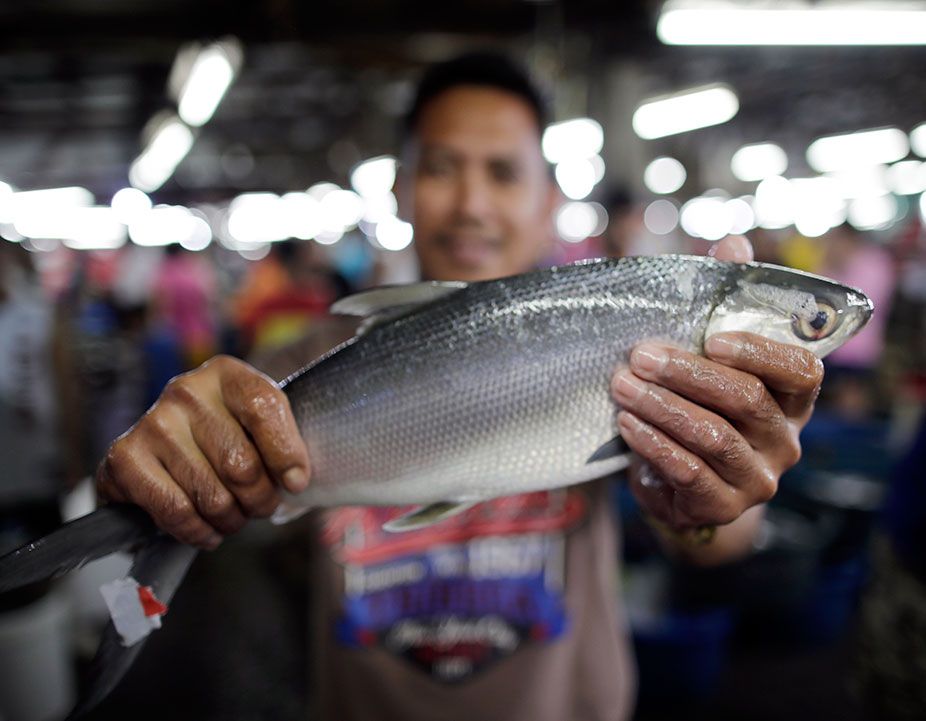 Overfishing has threatened the productivity and viability of ocean ecosystems around the globe since the late 1990s. In fact, 11 of the world’s 15 major fishing grounds were “seriously depleted,” according to the United Nations Food and Agriculture Organization.

About 70% of the Philippines’ fishing grounds “are currently overfished,” to quote the news report which came out in the website of Sun Star. “Based on available relevant studies, it shows the Philippines is already overfished by 60%.

“We are running out of fish and running out of time. For a country known for marine biodiversity, there are very few fish left to catch,” Vince Cinches, Oceans Campaigner for Greenpeace Southeast Asia, told a national publication.

“Like the other vital resources such as forests, Philippine fisheries are about to collapse,” deplored Roy C. Alimoane, the director of Mindanao Baptist Rural Life Center (MBRLC), a non-government organization based in Davao del Sur.

Poor Fishermen
But despite such huge areas, the fishermen and those who rely on the oceans and other bodies of water are still grappling with poverty.  In fact, most of them belong to the “poorest of the poor” in the society.

“Poverty in coastal communities, the progressive decline of fish population and catch, the pervasive encroachment of commercial fishing vessels in municipal waters are just some of the issues in fisheries that may not be grabbing the national headlines… but they heavily impact in real ways the national economy, food security, the health of our oceans, employment, and our response to the climate crisis,” deplored Gloria Ramos, vice president of Oceana Philippines, an organization working exclusively to protect and restore the world’s oceans.

About 56% of Filipinos’ animal protein comes from fish, and 91% of fish caught in-country are consumed domestically, Oceana pointed out in a press statement.  “Not only is fish a vital food source, it also provides livelihood for millions of Filipinos,” it said.

“The fisheries sector is one of the most important sources of food and livelihood in the country,” said Dr. Reynaldo V. Ebora in his presentation during the 12th Annual Meeting and Scientific Convention of Outstanding Young Scientists.  “Fish is the country’s second staple food next to rice.”

“Although its share to the gross domestic product is a mere 2%, the gross value added at constant prices of the industry amounted to P123 billion,” he said.  “The Philippines ranked 8th among the top fish producing countries in the word in 2014 with its total production of 4.7 million metric tons or about 2.4% of the total world fisheries production.”

Production Is Decreasing
But the production is waning.  The Sogod Bay in Southern Leyte is a case in point.  Home to a variety of fishes, it is a major fishing ground for the 11 municipalities that surround it.  Mangko or frigate tuna (scientific name: Euthynnus affinis) is its major fishery resource. Seasonal influx of this shallow-water tuna species has provided food and livelihood to the people of Sogod and nearby towns.

“Frigate tuna used to abound in Sogod Bay and was a major source of income in the 70’s until the 90’s,” Dr. Salome Bulayog, an associate professor of the department of economics at the Visayas State University, told Marid Agribusiness Magazine.  “But today, fishermen could hardly have fish catch.  Fishermen have to spend longer time to catch a kilogram of fish; some even have to go farther from the shore.”

As a result of the downtrend in fish catch, those fish sold in the market has become more expensive.  “People are aware of this problem,” Ramos believed. “The impact on marine biodiversity is not just evident to the scientists, but also to consumers and fisherfolk.”

The Blue Revolution
A new kind of revolution is needed to catch up with the demand for fish. “New technologies, new breeds and newly domesticated species of fish offer great hope for the future,” The Economist said in a report.

That’s where “blue revolution” comes in.  If you’re wondering just what it is, just remember the “green revolution” of the past.  If you have forgotten, the “green revolution” refers to a set of research and development of technology transfer initiatives occurring between the 1930s and the late 1960s that increased agricultural production worldwide

“On land, the green revolution allowed dramatic increases in crop production, with increased mechanization, and improved pest control and soil fertility through the addition of herbicides, pesticides and nitrogen-based fertilizers,” The Economist explained.

So, if the same technique can be adopted in the waters, the sobriquet “blue revolution” (refers to the color of the ocean) came into existence.

“The blue revolution has seen companies breeding fish to improve traits such as their growth rate, conversion of feed into flesh, resistance to disease, tolerance of cold and poor water, and fertility,” said The Economist.

But aquaculture should not be considered as the ultimate solution to the problem of fish crisis, according to Dr. Jeffrey D. Sachs, director of the Earth Institute at Columbia University, in an article published in Scientific America.

“Aquaculture brings its own ecological challenges: it can spread diseases from farmed to wild fishes, pollute nearby waters with excess nutrients, lead to habitat destruction (such as the clearing of mangroves for shrimp farming), and threaten genetic diversity through the release of farmed species into the wild,” Dr. Sachs wrote.

Of course, Dr. Sachs knows that there are better aquaculture technologies which are already evolving rapidly. “Public funds and prizes could promote research to advance them,” he suggested.
Dr. Sachs concluded: “With sensible global policies, the blue revolution can indeed become a major force for improved human nutrition, economic well-being and environmental sustainability.”

Climate Justice is Needed to Save the Planet

To stop the gallop to self-harm and destruction of the planet and our environment, there needs to be a huge change in lifestyle among humans. Citizens are to demand governments to give climate justice…