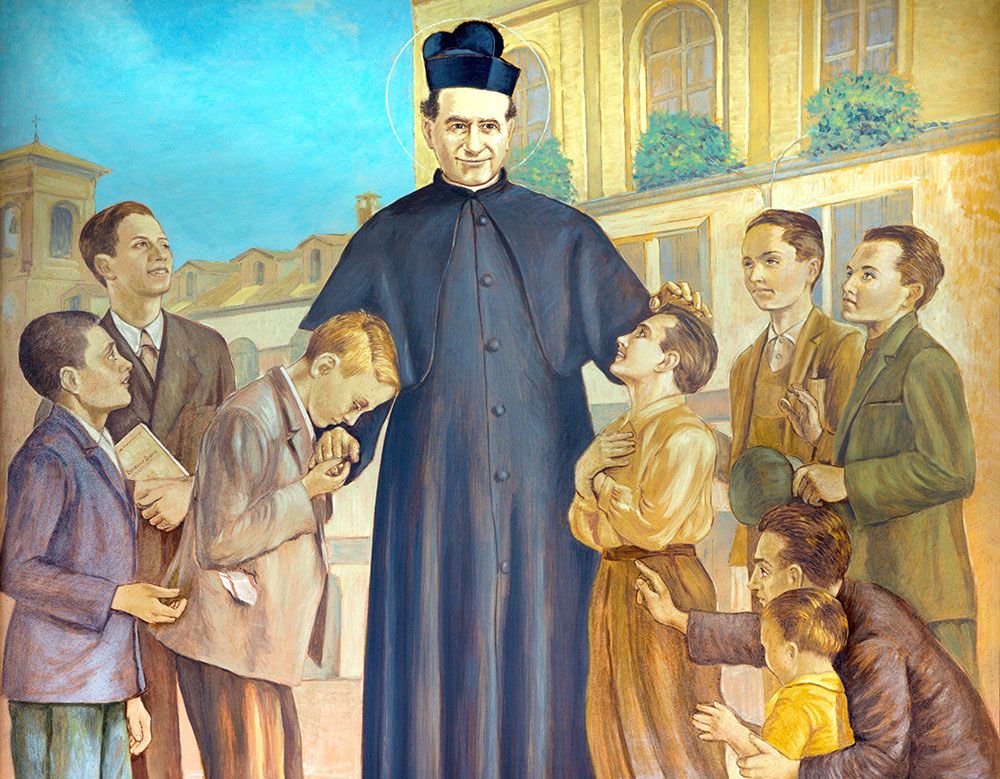 In The Footsteps Of Don Bosco

The Salesian Cooperators are Catholic lay people who are living the Gospel message in the spirit of Don Bosco by helping out in the different activities of a local Salesian school, parish or youth center.

Turin in Northern Italy was an industrial town at the beginning of the industrial revolution in the second half of the 19th century. Child labor was common and because of the economic crisis in the agricultural areas of Italy at the time, great numbers of children and young people were leaving the farms to find work in the cities.

The children worked six days a week but had Sundays off. Don Bosco gathered these street kids in vacant lots for a day of play. He brought them to Church for Mass and a catechism lesson. To help him with the hundreds of boys who came to him, he enlisted the help of several people.

Don Bosco knew he would need the help of other committed people of good will to care for the children. He invited people who he felt had the talent and the desire to minister to young people. His own mother, Margarita, came to help him. During his years of pastoral work in the three Oratories of Valdocco, Porta Nuova and Vanchiglia – 18 years before the founding of the Salesian Religious– Don Bosco sought and found collaborators.

They are diocesan priests, sensitive to the predicament of the youth, the nobility or simple people who teach catechism and night classes, provide for the material needs and seek work for the boys in the city, and women who do the sewing, mending, and cleaning.

The Salesian Preventing Method
Later on, with the help of Pope Pius IX, Saint John Bosco formed the Association of Salesian Cooperators. From the founding until now the Cooperators is composed of single or married lay men and women and the diocesan clergy who dedicate themselves to the welfare of young people and live guided by Don Bosco’s Salesian spirit.

The movement was created with the purpose of sharing the ideals of the Salesian Preventive System in the education of young people, especially those who are poorest, without the need to be a priest or a lay religious. At present, there are around 30,000 people affiliated with this movement around the world, working in eleven countries.

The “Salesian Bulletin”
Don Bosco linked the development of the “Salesian Bulletin” to the foundation of the Cooperators. He wrote: “Hand in hand with this project, we have decided to publish a bulletin which will pretty much become the Congregation’s official publication and include many things we’ll need to make known to our cooperators. It will come out regularly and will link Salesians and cooperators.”

So many years have passed  but the link between the Collaborators and the “Salesian Bulletin” remains: The news of the vast Salesian family are not only shared, but the Salesian pedagogical tradition also continues to influence all the members, especially the Collaborators for whom it was conceived by Don Bosco himself.

The Salesian spirit of proactive involvement in the life of the youth to prevent them from falling into bad companies and foul habits continues with its tradition of joy, honesty, industriousness and stubborn fidelity.

Credible Witnesses
The core of the ‘Salesian Cooperators’ commitment is to live his or her life as a Good Christian and a Good Catholic. The Salesian Cooperator embraces the Gospel way of life, sharing in the Church’s mission to bring Christ to society, especially the young.

Fr. Artime replied: “What I ask of you, Salesian Cooperators, is to live the guidelines you have for your six-year term, but I would like to add a further, topical element. Today, our world needs witnesses and to see credible witnesses. Live your identity as Salesian Cooperators wherever you are, and be authentic witnesses there.”