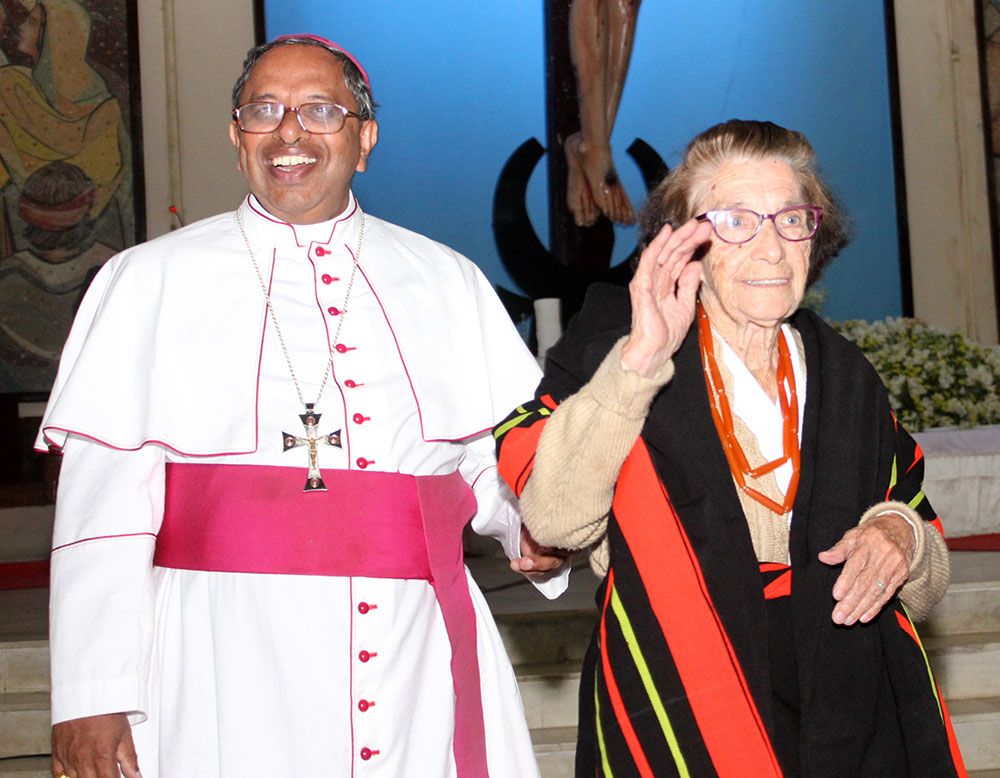 Fondly called the “Mother Teresa of Garo Hills” in Northeast India for her dedication to the people of the region, Sister Guadalupe Velasco spent seven decades of her life serving the sick and persons with leperosy.

Sr. Guadalupe Velasco, one of the first Catholic Missionaries to work in Naga Hills, passed away on 11 March 2020 at the Nirmali Convent in Laitumkhra, Shillong, India, as a nonagenarian, running 97. With her passing away, Nagaland’s direct connection with the first Catholic missionaries has come to an end and one of the earliest Catholic communities, Kohima village, has lost its sower of God’s Word.

To know about this unassuming extraordinary Catholic nun, who spent 71 years in Northeast India as a member of the Missionaries of Christ Jesus, we need to go to the land of Navarra in Spain and to the past, 96 years ago.

Away from the shores of Atlantic and Mediterranean, away from the land of Saints Teresa of Avila and Francis Xavier, there was born a daughter, on 15 February 1924, in the family of Pedro Velasco and Ascension Gelos as eighth among the nine children in a small town called Villafranca. She was destined then to reach the eastern most part of the Indian subcontinent which would become one day a new independent country.

Memories of the past, both nostalgic and bitter, take us to the Spain of the 1930s when it fell a victim to a civil war and untold tragedies caused by the republicans. A Spanish Archbishop, Antonio Montero Moreno, wrote that the Spanish civil war claimed 6,832 lives of which about 4,000 were priests, 2,500 were monks and 300 were nuns, besides 13 bishops.

The year 1937 shook the Velascos to its foundation. At that time, Guadalupe was thirteen. The family had to see the brutal killing of the 22-year-old Antonio Velasco, their only surviving son and Guadalupe’s brother. He had joined a movement against the republicans when they burnt down churches. Such gory realities, however, could not stop the God-fearing youngsters embracing priestly and religious life. Guadalupe Velasco, affectionately called Lupe, was one such young girl.

Having finished basic education in her native town, the teen-aged Lupe was told by her mother to become a tailor. It was while learning tailoring and being an active member of Catholic Action that she heard God’s call to join the Missionaries of Christ Jesus, the newly founded Congregation by Mother Maria Camino Sanz Orrio. She entered the novitiate on 18 May 1945 making a life-long commitment.

Mission Beyond Spain
The progressive new religious Congregation of women was post-Vatican before the Second Vatican Council was even conceived. The mission looked beyond Spain. Their lifestyle dropped the occidental demands. Ministry was founded on signs of the time. A clear sign from God to Mother Camino was the request from Bishop Stephen Ferrando of Shillong in 1948 to work in the Naga Hills in Northeast India.

It was the moment after World War II when the soil of the Naga Hills and Manipur had become a battleground for two aliens–the British and the Japanese. The time promised only uncertainties and sorrows. But, “Providence brought the war to an end, people’s desire for peace did descend and India soon became independent.”

The Catholic Church in Naga Hills cannot be understood without a reference to the Second World War and the independence of India. Since Nagas’ loyalty was displayed to the British, the end of war brought in a ‘war-gift,’ a hospital for Nagas, in recognition of their service to British soldiers during the war. The independence of India brought in the responsibility of managing the hospital by the Government of Assam of Naga Hills then, thus paving the way for the Catholic Church to enter Northeast India.

At the request of the then Governor of Assam for Catholic nuns to serve in the newly opened Naga Hospital at Kohima, the bishop of Shillong, Msgr. Stephen Ferrando, eagerly accepted the offer. Losing no time, he invited the Missionaries of Christ Jesus to take up medical service at Kohima in Naga Hills and other places.

After a month-long stay at Shillong, a group of two nuns–Srs. Guadalupe Velasco and Margarita Cifre– left for Kohima with their chaplain, Msgr. Emmanuel Bars on 29 December 1948. After a long journey, they reached Kohima on 31 December 1948, the last day of the year, to inaugurate the dawn of the mission.

Sowing The Gospel Seed
They began their stay in the only hotel of Kohima until they moved into the Naga Hospital. They started their work in the hospital on 2 January 1949 by cleaning the rooms, dusting off old mattresses, preparing beds and bathing the sick.

The sisters and their chaplain were forbidden from doing any pastoral ministry other than medical care. Their service was eventually described as “excellent” and it was loved by doctors, patients and the military. The missionaries thus continued tending the sick and meeting friends until the expiry of their five-year contract with the government.

The second stint of Sr. Guadalupe as a missionary took her to the Government’s leper asylum at Tura in the Garo Hills. Sr. Lupe said that in the beginning, the centre was in a dreadful state and the patients’ condition was pitiable. But the heroic care of the sisters changed lepers’ lives completely and a new era dawned for the patients.

When India was known only as a land of snake charmers and a land stricken with poverty, the knowledge that one had about the Northeastern part of the country was miserably low. It was to this place Sr. Guadalupe came “to follow Jesus and to do good,” the motto that she had chosen for her religious life.

Sr. Lupe’s work definitely cannot be compared to that of St. Francis Xavier. Perhaps she never witnessed Baptisms at Kohima. But she did one thing–the sowing of the Gospel seed by nursing and healing thus giving to people what Jesus did.

In those days, leaving the homeland as a missionary meant leaving forever and never to return. But, thanks to the changes brought about by the Second Vatican Council, Sr. Lupe could return to Spain for the first time after eighteen years, but only to see her home without mom, dad, and many of her dear ones.

The Lord Gives Strength
Regarding her ministry among the lepers she once said, “The Lord gives me strength to go forward and keep going until I die. I do it because my vocation is missionary work.” She said this during her unforgettable moment of holding the hands of Pope Francis, in a general audience on 26 Aug. 2015 at the Vatican.

“How good! How good!” was the reply of Pope Francis in admiration to Sr. Guadalupe. Leaving all adulations, she returned to Northeast India, where her heart was, to continue what she could to the people, the lepers, to whom she spent almost all her life, leaving traces of footprints which time will not dare to delete.

The Church in Nagaland marches on in joy. One reason is the strength and power she receives from Christ. The other, she cannot forget, are the footprints left by the early missionaries like Sr. Guadalupe Velasco.

Human Trafficking, Why So Few Convictions?