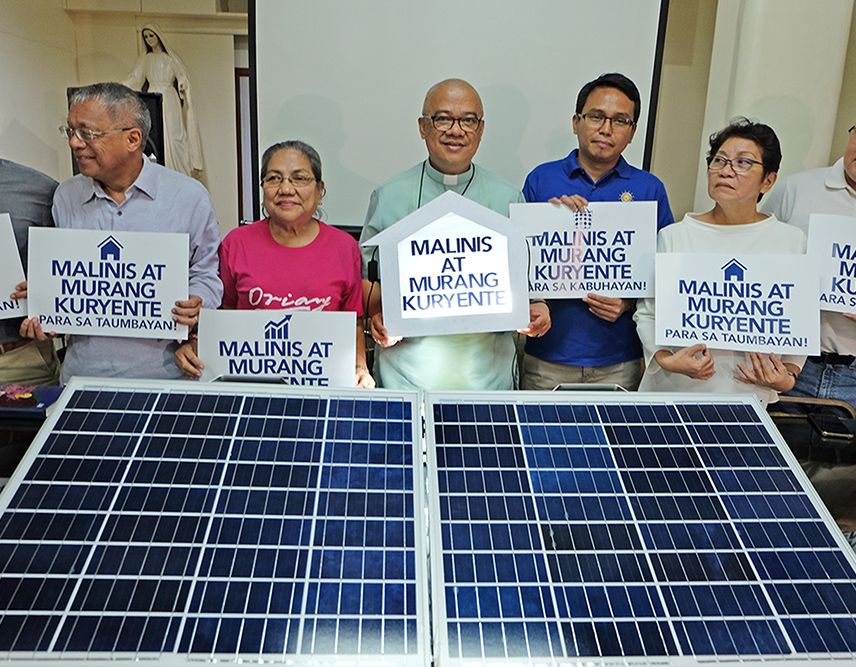 Bishops have been at the forefront in attempting to address environmental issues plaguing the Philippines and the planet.

In 2021, the Royal Swedish Academy of Sciences announced that natural scientists Giorgio Parisi, Syukuro Manabe and Klaus Hasselmann had carried out groundbreaking physical modeling of the Earth’s climate and quantifying variability to reliably predict climate emergencies. Their efforts won them the 2021 Nobel Prize in Physics and that’s the good news.

The bad news is that, when their pioneering work in the 1960s and 1970s sounded an early warning on human-made climate change, only a few world leaders listened. Now, it’s “code red for humanity” or “an irreversible tipping point,” as confirmed by the United Nations in 2021.

We are amazed to know that Pope Francis has been reading these deplorable signs and, in 2015, he addressed this issue by giving the world a moral imperative called Laudato Si’.  The universal impact of the Holy Father’s call to action in Laudato Si’ was so profound that it obliged many world leaders, particularly John Kerry, the first US special presidential envoy for climate, to push the renewed idea of moral authority.

Fuel Divestment
In line with the Philippine National Laudato Si’ Program, the Catholic Bishops’ Conference of the Philippines (CBCP) published a pastoral letter titled “A Call for Unity and Action amid a Climate Emergency and Planetary Crisis” in January 2022, signed by Bishop Pablo S. David of Kalookan, the CBCP president.

It is definitely one of the strongest episcopal pronouncements on the subject. In it, Filipino bishops made their commitment to join the very few episcopal national conferences, making a universal call for fossil fuel divestment.

As a non-profit institution, the Catholic Church, the Mystical Body of Christ, does survive and is maintained in its temporal affairs through donations given by generous souls who believe in the evangelical mission of the Church.

Imagine the impact of the 2022 CBCP statement that urged all dioceses, institutions, and parishes to decline “any donations of whatever kind ... from any representative of extractive industries, especially coal, fossil gas, mining, quarrying, logging.”

“Move away!” all the Church’s financial resources from them, implored the bishops, as they reiterated the urgent message of their 2019 pastoral letter that directed all Catholic institutions to cease investments in mining industries, coal-fired power plants, and other extractive projects.

They did not stop there. They also advised all “Church institutions to press their banks to phase out fossil fuel holdings” and, as stakeholders, to actively urge “financial entities to adopt sustainable finance policies and invest in renewable energy and ecological restoration and protection efforts.” You have until 2025 to do it, the bishops said.

Paradigm Shift
Call it a paradigm shift, but that’s how the Filipino hierarchy now deals with temporal goods, which are meant “solely for the common good, the integrity of creation and the glory of our Creator”.

The bishops of the northern Philippines, especially Bishop Leopoldo Jaucian, SVD, of Benguet, had in mind the Philex Padcal mining disaster in 2012 that caused the largest toxic tailing spill in terms of volume–10 times larger than the 1996 Marcopper mining disaster in Marinduque.
In their collective desire to prevent another rape of Mother Nature, they petitioned President Benigno Aquino, who during his term imposed a nine-year moratorium on new mining deals. Unfortunately, former President Rodrigo Duterte lifted this moratorium in 2021.

Eventually, the extractive industry began to hard-sell the Tampakan mines in South Cotabato by telling Mindanaoans that it would generate 1,000 jobs and billions of dollars in export earnings along with two other mining operations in Mindanao.

Bishop Allan Casicas of Marbel was quick to mobilize advocacy against it, warning that mining would definitely destroy the Mindanao River Basin and severely affect three million residents in nine provinces.

In Negros Occidental, civil society and the Church took a firm stance against the proposed coal mining as Bishop Gerardo Alminaza of San Carlos challenged Duterte to leave a legacy that sided with the people and ecology.

The Filipino bishops, on their own turf, exerted their pastoral authority to address the planetary crisis.

On his part, Archbishop Ricardo Baccay of Tuguegarao warned that off-shore magnetite mining in Cagayan province, which was devastated by massive flooding in 2020, would cause massive erosion in coastal areas, exacerbate more flooding, and “might again cause the loss of lives”.

In 2020, the Vatican lauded the Philippine Church, particularly Maasin Diocese, for its courageous moves to protect the environment. One sterling Vatican document on integral ecology mentioned the Maasin Diocese as “the first diocese in the world to equip all parishes with solar panels” to generate renewable power.

Bishops Patrick Daniel Parcon of Talibon and Alberto Uy of Tagbilaran made sure they were not behind in the big fight against global warming. The two dioceses also collaborated with private companies and other organizations for large-scale use of solar energy in Bohol province.

Ecological Ministry
On Nov. 3, 2021, Archbishop Jose Palma of Cebu called for the “setting up of a parish ecological ministry in all parishes in the archdiocese” in line with the implementation of the archdiocesan 500 Legacy Trees Program.

Why are the Filipino bishops so passionate about it? Two things to consider: First, by virtue of its geographic situation, the Philippines is in a natural disaster zone of volcanic eruptions, floods, and earthquakes. It is an archipelago “battered by multiple tropical storms including some declared to be the deadliest in the world from 2013 to 2021,” said the 2022 CBCP pastoral letter.

Secondly, it is also a country internally ravaged by environmental abuses such as illegal logging and mining, the dumping of chemical and toxic waste from other countries, and thoughtless disposal of plastics. The first is natural and the second is man-made. That makes the first thing worse.

In 1988, the CBCP produced the world’s first pastoral letter on environmental stewardship titled “What is happening to our beautiful land?” It was actually the very first time that a bishops’ conference anywhere in the world has directly confronted the threat of environmental degradation and climate change.

When Pope Francis was writing Laudato Si’ in 2015, what the Filipino prelates said lingered in his mind, so much so that in paragraph 41 of that encyclical, the Jesuit Pontiff asked the basic question, citing the 1988 CBCP document verbatim: “Who turned the wonder world of the seas into underwater cemeteries bereft of color and life?”

This distressing worldwide phenomenon is due largely to highly polluted seas and oceans, resulting from “deforestation, agricultural monocultures, industrial waste, and destructive fishing methods, especially those using cyanide and dynamite,” added the Holy Father, once again quoting the CBCP pastoral letter.  Republished with permission of Ucanews

Pope Francis: A model of how to care for the homeless

A tangible expression of the Pope of Mercy is his concern for the homeless. Through it, he not only sets an example of how Christians should act but also reminds us of our obligation toward the poor,…