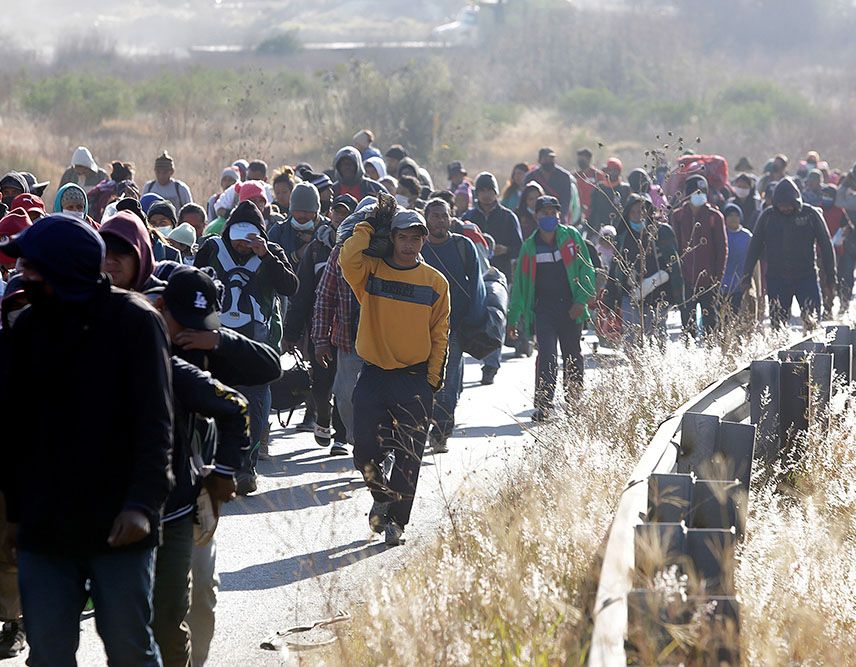 Unless safe, legal migration routes are created, traffickers will continue to do what they want, and tragedies like the one in Chiapas, Mexico, will happen again, especially in developing and war-torn regions. As the number of migrants is increasing, these routes are becoming more necessary.

Fifty-five people seeking better living conditions lost their lives in a car accident on a road in southern Mexico. The disaster, one of the worst ever involving migrants, was yet another reminder of the need to create safe routes for those who are fleeing poverty or violence.

It happened in December last year on the eve of International Human Rights Day, on a curve in Chiapas in the south of the country, a state marked by many instabilities and bad news. The fugitives, mostly Guatemalans, were hiding and jam-packed into the trailer of a truck, driven by a trafficker of people. The speeding vehicle made a wrong turn and overturned, the authorities said, killing a third of the illegal immigrants and injuring the rest to a greater or lesser extent.

They were heading north towards the port of Veracruz and the US border, certainly dreaming of the life they hoped for on the other side, a major goal, every day, for thousands of others of the same origin- Caribbean, Salvadoran, African or Asian. They did not arrive. They joined an already long list of victims–men and women of all ages.

Frightening Numbers
The numbers are staggering. According to a report by the International Organization for Migration (IOM), published weeks before the disaster, 1,060 people, including 48 children, died on the region’s migration routes as of November last year. And the figures are provisional, as the data are based on furtive movements and areas where many enter and few leave alive. For example, the Tapón del Darién consists of 575,000 hectares of thick jungle, rivers, and rugged mountains, full of bugs and fevers. Found between Colombia and Panama, the region is where 42 of the victims stayed. It is one of the most dangerous routes in the world for refugees and migrants. (see sidebar).

But even getting to the most beloved of the world’s borders means nothing because of Quédate en México (Stay in Mexico), one of the most odious anti-immigration measures of the Trump era that the successor, Biden, conveniently maintains. If crossing the country northward can be a dangerous adventure, due, for example, to banditry, many candidates already die on the line to the dream; last year alone there were 650.

Hypocrisy
Quédate en México was a program created by the previous US Administration by which asylum seekers in the United States are forced to stay outside while migration authorities review their cases. The measure, which is hypocritically called the Migrant Protection Program and has received an embarrassed yes from President López Obrador, is criticized by the United Nations and several human rights organizations among other reasons for facilitating tensions and crime in the border camps.

The dark side of the migration tragedy is, however, its business. In the Chiapas disaster, the truck driver fled as soon as the trailer overturned. He was at the behest of the traffickers, who reportedly charged $13,000 per head.

More than 200,000 people cross Mexico every year to reach the United States, most of them carried by networks, and the number is multiplying. The United Nations Office on Drugs and Crime (UNODC) has launched an initiative to curb organized trafficking. Named “Starsom,” it will last for two years and assist thirteen countries by supporting the states involved in preventing and investigating the crime along its main routes.

But the best measure to mitigate the tragedy, proposed by United Nations High Commissioner for Refugees (UNHCR) and human rights organizations, is the creation of safe, and legal, routes for those fleeing natural disasters, misery, or violence, wherever they occur.

I Believe in Heaven

One of the stunning messages contained in the Beatitudes is that faith transforms our darkest inner moments into light. Jesus Christ has the power to convert the desert of human hearts into blossoming…