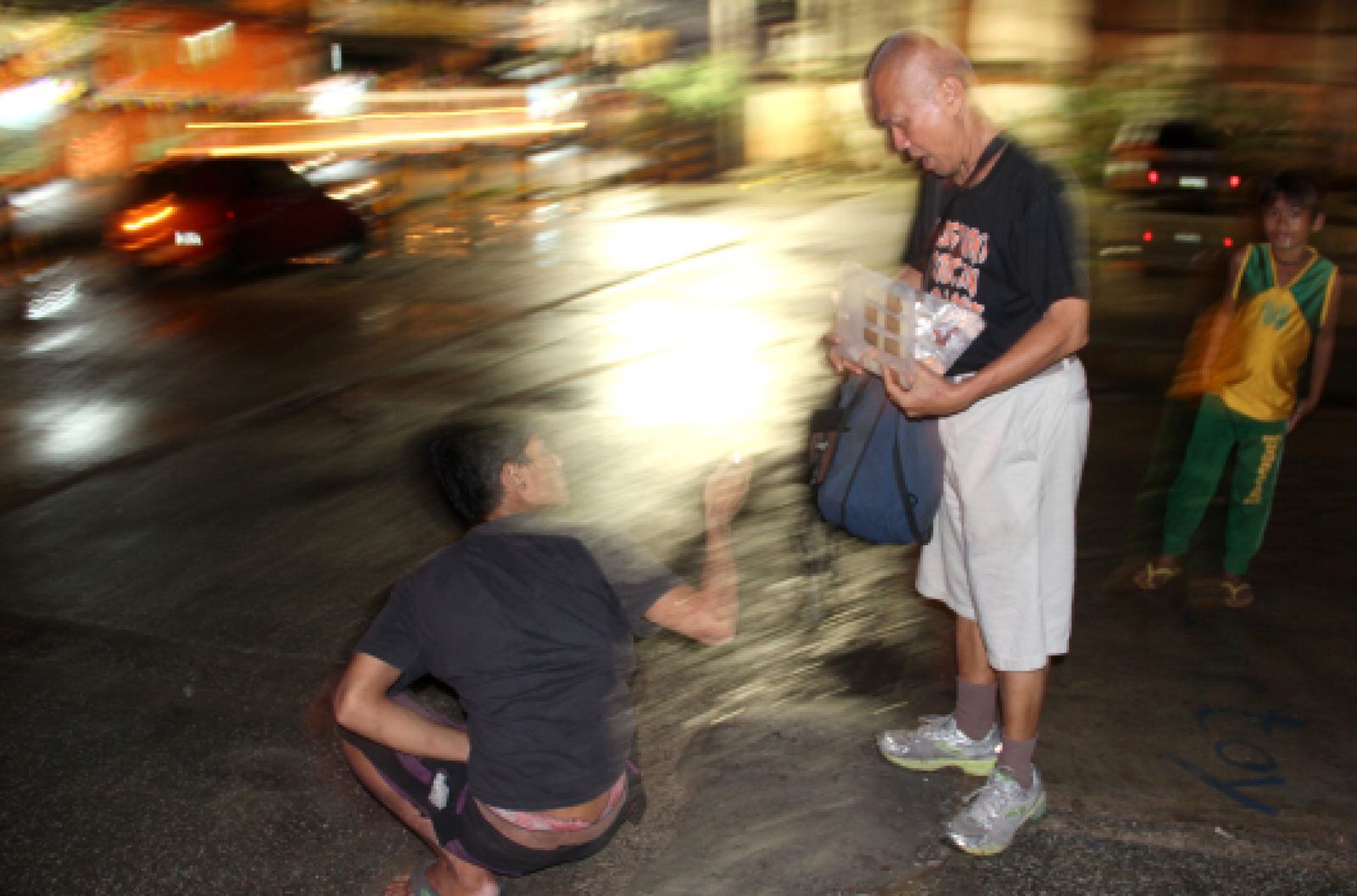 The insistent invitation of Pope Francis to the Church to ‘go out to the peripheries’ of society in order to encounter Christ there, is, on one hand, an implicit acknowledgment that the ‘peripheries’ in society and in the world are still many and, on the other hand, that we are not doing enough to be present and minister to those who live in the ‘peripheries.’ It is, therefore, inspiring when we come to know someone like Bro. Paulino (Paul) Bongcaras, who has made the ‘peripheries’ of Cebu City not just a place for his outreach activities, but a place he calls home.

When asked to share about himself, Bro. Paul Bongcaras, a member of the Society of Divine Word (SVD) states without hesitation: “I am a Boholano-Cebuano by birth; a teacher at San Carlos University in Cebu by profession; a Religious Brother by vocation and, by choice, a brother who journeys with those who are marginalized by our society – women, children, families, old people, persons with disabilities and others who are living on the sidewalks. I am particularly dedicated to those women and children, but also to men involved in sex work, the victims of human trafficking, persons living with HIV, the prisoners, the scavengers who live at the dump sites, the sick, the dying, those who are looked down upon.

Bongcaras, now 69, had made a courageous option to be among the society’s throwaways since his younger years. In 1977, he was sent to Papua New Guinea on mission. His heart was caught by the young -- the juvenile -- who saw their dreams blurred by their own wrongdoings. To them, whom society calls “rascals,” he became a ‘big brother,’ sharing in their sorrows and nurturing their hopes. After 15 years of dedicated service, he was asked to return to the Philippines and, based in Cebu, he was asked to teach at the San Carlos University. Soon after though, he realized his call was to be at the frontline sharing his life, not only with those who celebrate accomplishments in their academic journeys but, more so, with the poorest of the poor in their nothingness. Thus, since then, he has been a teacher in the morning and a ‘big brother’ to the poor in the afternoon and evening.

Many come to him for help. He shares his friendly smile and listens attentively to their stories. He shares food, medicines and his loving embrace. These gestures strike a chord in their hearts because they are so used to being avoided, neglected, and bluntly rejected. Many more await his visit to the slums where some have built their shacks, striving to survive day after day. He loads his bags with medicines, biscuits, chocolates and condoms for the sex workers. He hangs the bags on his shoulders and, as the night falls, he sets out into the dark and narrow pathways where nobody dares to walk, except those who live there and those who take advantage of the dwellers’ poverty by pushing drugs and exploiting them for sexual favors.

Immediately, he is stopped by a woman with a child in tow. “Bro. Paul, thank God you are here! Give me medicine, please. My body is full of rashes,” she says as she shows her legs, arms and face. He reaches out to his bag and hands her a little plastic with skin ointment. He also gives biscuits to the child who breaks into a smile. He hugs the two and moves on. On entering the narrow path, a group of young ladies runs to him. “We have been waiting for you!” they say. “Those are sex workers and many are infected with HIV,” he confides to me later. With unwavering smiles he attends to their needs, embraces the kids and promises to be back soon. His journey is often interrupted along the way but he does not mind. His inspiration is the story of the Good Samaritan (Lk 10:25-37) who finds that a needy person is always a good reason for an interruption in our busy journeys in life.

A world of exploitation

The dark alleys symbolize many situations of marginalization and exploitation in the world. Bro. Paul is not one who will run away from them. On the contrary, he goes deeper into them, concerned not only with the fact that people there are poor and hungry but, most of all, many of them are unscrupulously taken advantage of. Many of the girls are trafficked into prostitution with promises of a better life, only to end up living like prisoners in small rooms of brothels. As if this was not enough, many prostitutes, in some areas of the city, have to pay a kind of “revolutionary tax,” Bro. Paul says. Since prostitution is illegal, those who ought to look after their welfare are often those who impose a ‘tax’ on the women in order for them to continue their work in their preferred place.

Drug consumption and sicknesses are also rampant in these milieus. Many of those in prostitution often use drugs to cope with the many clients they have to satisfy night after night. The sharing of needles to inject drugs, the lack of contraceptives and means to avoid transmission of diseases, and the prevalent homosexuality have brought the HIV rate from being low and unspoken of in the early 80s, to being currently high and fast-growing in numbers in these areas. In 2013, 52.3% of injected drug users in Cebu tested positive for HIV.

To address this situation, the Department of Health and Philippine Drug Enforcement Agency had agreed to distribute needles for two years to see if the number of cases would decrease. This experiment received much opposition and was eventually stopped. However, Bro. Paul continues to provide syringes and contraceptives to those who are at risk while calling for action from the government. “We have had cases of people who died from HIV and, sadly, even churches refused to accept requests for mass for them in the church,” Paul laments. “There is a need to train parish workers to make them aware of the realities of HIV and human trafficking around us. As church people, we need to be more concerned with these victims,” he adds.

Aside from medicines, Bro. Paul offers acceptance and does not judge. He doesn’t just hand out pills; he is a friend of the people. Bro. Paul believes in his heart that “the world is for all and no one should be left behind!” Therefore, his strategy is simple but effective: avoid judgment, be present, be a friend, and make connections with like-minded and like-hearted people. This has led him to become founder and facilitator of the low profile movement “Friends of the Poor and the Marginalized” in the early 1970s. All workers are unpaid. Majority of them are former drug users, commercial sex workers, victims of trafficking and persons with HIV. Other volunteers are professionals and students who share part of their time, treasure and talents. All are committed to the same mission of friendship – reaching out to the poor, making sure that no one is left behind.

“Even the traffickers and owners of bars where the girls work?” I ask. “Yes!” he readily answers. “Traffickers are not so different from us. Many of them are my friends. Like me, they are happy when their needs are met and sad when they are not. I found out that we could help each other. I could offer training to their girls. In fact, they have asked me to talk to their girls about God, about family, about HIV. I share some medicines with them. Through all these, they feel they have utang na loob (debt of gratitude) towards me, and so they do not oppose me when I invite the girls to leave prostitution and offer them help to start a new life.”

Bro. Paul refers those he manages to rescue from prostitution to a drop-in center where they can stay and get the help they need. To re-start their lives, a program to recovery is offered with the help of NGOs, government agencies, faith-based organizations and other people of goodwill whom Bro. Paul seeks out for partnership.

Prostitution, human trafficking, HIV victims, homelessness, inhumane conditions of life “… all these contemporary ‘maladies’ have different root causes – broken or dysfunctional families, lack of opportunities for education, peer pressure, lack of values, lack of concern by government and even by the church authorities, our insensitivity to human suffering, etc. It is difficult to tackle all the root causes. But we can and we must give non-judgmental love and acceptance. Our presence and commitment to them are very important,” says Bro. Paul.

“Recently a sidewalk dweller died from AIDS. Her body was not allowed to enter the church, much more, blessed with the Sacrament of the Holy Mass. She left three children, ages 2, 6 and 9, whose father is in jail. The first and the youngest are also with HIV. I felt sad because – with the many homes for children run by the government, the Church, and concerned groups – no one was willing to welcome those with HIV. Would someone be willing to offer a home for these three children?” Would anyone be willing to offer a home for the marginalized for that matter?

In the Year of the Clergy and Consecrated Persons, World Mission features Bro. Karl Gaspar, an award-winning writer, respected socio-anthropologist, theologian, interfaith scholar, and missionary from…