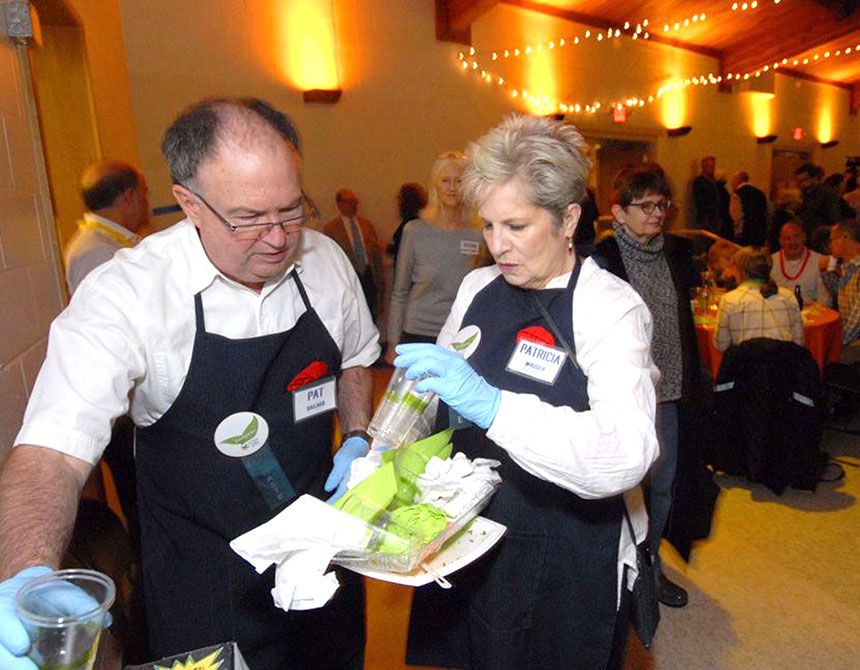 Let’s say your parish recently hosted a patron saint’s feast. Food was served. Many plastic forks and knives and plates were used, and then tossed out. Let’s say this bothered you. Sounds familiar? What are parishes doing to eliminate their use of single-use plastics and reduce waste? Let’s start with the basics.

Single-use plastics are just what they sound like: plastic items that can only be used once before they are thrown away or recycled. These are your plastic grocery bags, straws, cups, bottles, lids and utensils. The list goes on. Single-use plastics are, quite literally, everywhere. It’s pretty overwhelming.

Consider this. In 2016, humans produced more than 300 tons of plastics globally, according to Earth Day (Fact Sheet: Single-Use Plastics). Half of that was for single-use plastics–items that are used and discarded in a matter of moments but last for hundreds, perhaps thousands, of years. But what makes single-use plastics so bad? I always recycle!

Reduce Consumption
Recycling is great. Keep recycling! But as Valeria Merino, Vice President for Global Earth Day, pointed out in Catholic Climate Covenant’s 2018 webinar on plastic waste, reduction is actually “the core idea … We think that unless we reduce consumption, everything else is minor.”

The UN has reported that only nine percent of the world’s plastic has actually been recycled. Pope Francis himself uses a special phrase for our single-use plastic addiction: the “throwaway culture.” Most of our plastic goes into landfills and is broken down into smaller pieces. Those smaller plastics can contaminate our soil and water, working their way into the human food chain.

Single-use plastics are sadly wreaking havoc on our oceans, generating dangerously massive wads of debris known not-so-fondly as plastic soup. According to Plastic Oceans International, a nonprofit dedicated to raising awareness about plastic pollution, more than eight million tons of plastic are dumped into our oceans every year. Moreover, one in three species of marine mammals has been found entangled in marine litter.

A toolkit created by the Earth Day Network suggests a three-step process for any group or individual looking to take steps at reducing their waste:

1. Learn about the problem

2. Examine one’s own consuming habits and look for ways not only to recycle, but more importantly, to reduce your usage

3. Engage others by sharing your own experience and inviting them to do the same

Examples Of Parishes
St. Joan of Arc Church in Minneapolis, US, started their waste reduction process by looking at their parish’s hospitality functions. They moved away from using plastic foam cups to compostable versions. Eventually, they reduced the waste headed to a landfill at their annual three-night Cabaret fundraiser to a mere 38 pounds.

Many parishes have taken similar steps to substitute disposable tableware with reusable plates, utensils and cups. Similarly, some parishes have opted to stop serving bottled water at parish events and instead set up pitchers of tap water and compostable cups.

St. Mark Church in Vienna, Virginia, US, took steps to raise awareness, including hosting a speaker about living a zero-waste lifestyle and screening the documentary “Bag It.” Events like these are important because one of the biggest hurdles for parishes taking on waste reduction to overcome is changing the culture.

-     Start with relevant info in bulletins and newsletters. Make waste reduction relevant by making connections to issues in the local community

-     Get youth involved. They will influence their parents

-     Get the pastor and parish leadership on board. A word of support from the pulpit is incredibly helpful

-     Incorporate educational programming as part of any project

In its bid to save the endemic but critically endangered Philippine eagle from extinction, the Department of Environment and Natural Resources (DENR) is sending pairs of the country’s national bird…

Overfishing has threatened the productivity and viability of ocean ecosystems around the globe since the late 1990s. In fact, 11 of the world’s 15 major fishing grounds were “seriously depleted,”…